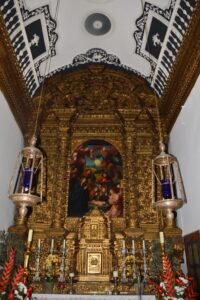 The place where the religious artefacts are displayed is not accessible.

It is a 16th century building, one of the oldest rural temples of the Diocese of Funchal and one of the most visited of the island, classified as Property of Public Interest.

Originating from a small chapel dedicated to São Bento, from the second or third quarter of the 15th century – the creation of the parish is said to have occurred around 1440, although not in the strict sense of the term, which according to some historians only happened around 1460 – the Ribeira Brava parish church, the seat of the parish and former collegiate church, is located in the centre of the town, having undergone several interventions over time.

This church has Manueline, Mannerist and Baroque features and houses a rich collection of painting, sculpture, goldsmithery and gilded woodcarvings from the 15th century – when the altarpiece of São Bento was made in the workshops of Francisco Henriques, in Évora – from the 16th century (altarpiece of the current Capela do Santíssimo, whose original is exhibited in Arte Sacra) and 17th century.

It is therefore one of the most important sets of heritage in the region, and its treasure has even been exhibited in the Royal Museum of Fine Arts in Brussels.

António Marinho Matos says about this temple in his work dedicated to this parish that it is “a majestic building to the sight and spirit.

Not so much from the outside, because nowadays the church is surrounded by large constructions that overshadow its grandeur. But inside it is dignified edifying and majestic and, despite having been transformed over the last centuries, it is today one of the most interesting patrimonial and artistic sets of the island of Madeira”.

He continues: “Many people enter this Temple and are amazed by its beauty.

Testimony to this human and Christian movement is the multitude of faithful, believers or simple visitors who daily visit its interior”.

In fact, among other interesting features, this church has magnificent chandeliers; a collection of silver pieces from the 16th and 17th centuries; a monumental image of Our Lady of the Rosary, of Flemish production, dating from around 1520; and panels of Flemish origin representing the Virgin and Child, from the early 16th century, of Our Lady, Saint Benedict and Saint Bernard, attributed to Francisco Henriques, evidence of the splendour of the sugar industry.

The main chapel is dominated by a magnificent altarpiece of gilded and polychrome carving from the late 17th century.

The richness of this church was, and is, such that the former parish priest, Father Gil, gathered objects that were stored in one of the annexes of the parish, which gave rise to the Igreja Matriz Museum with a collection of silverware from the 16th century.

The small museum has a guide that can help you better understand the collection on display and admission is free.

The Ribeira Brava main church is one of the places we can visit, since its access is easy.

This chapel suffered several alterations and repairs until the current parish church was built.

It is one of the oldest rural temples of this diocese, having undergone several additions and modifications, but its first construction must not be later than the second half of the 16th century.

However, an analysis of the existing church today leads to the conclusion that it was a small temple with an interesting pre-Manueline doorway, in principle, today placed as the doorway to the chapel of the Most Holy.

It is a portal of three Gothic archivolts, endowed with historic capitals, practically without parallel in the island. On the other hand, the work of the baptismal font and the pulpit of the mother church can be attributed to this small Manueline school, and the inscription on the font indicates that it was a gift from King Dom Manuel I.

Having S. Bento as its patron saint, the church has a portal with three gothic archivolts, with historic capitals, practically unparalleled on the island. Its construction dates back to the 16th century, and it was modified over the centuries until it reached the present building.

Inside, the church has three main altars: the main altar and two side altars. The main altar has a magnificent gilded and polychromed carved altarpiece from the late 17th century, attributed to the workshop of Manuel Pereira de Almeida, who was also responsible for the other two altars.

In the interesting group of images, you can also find a monumental image of Our Lady of the Rosary, of Flemish production, perhaps from the Antwerp workshops, dated from around 1520.

Inside, we can find Manueline works such as the capitals, the pulpit of the Matrix and the baptismal font (gift of King Manuel I), as well as a small nucleus with a collection of 66 pieces, in which there are silver candlesticks, crowns, sticks, cruets, chalices, cauldrons and other silver materials dating from the 16th and 17th centuries.

♿ 🟠- Accessibility: Medium (Access to the church without problems, No Access to Religious Artifacts, Surrounding Area With Problems on the Floor). 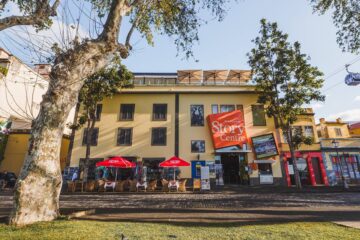 Carefully designed to provide a unique and fascinating experience, history is told using the 5 senses of the visitor, through interactive frames, smells, sounds, images and challenges, which will surely capture your attention. It is Read more… 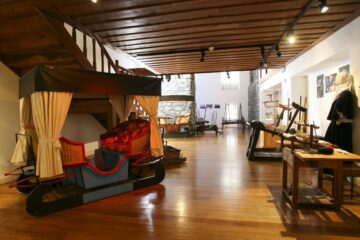 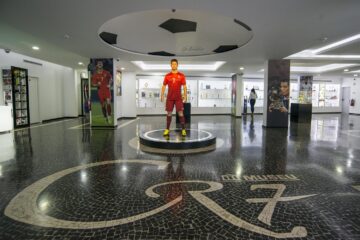 The museum depicts the life story of Madeiran player Cristiano Ronaldo and boasts the trophies won by the Portuguese international throughout his brilliant career. The CR7 Museum is the place where cristiano Ronaldo’s story is Read more…