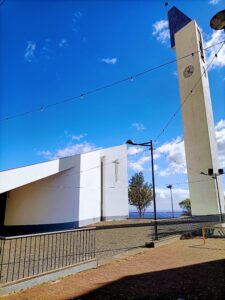 It was created, along with several other parishes, by Decree of Dom David de Sousa, Bishop of Funchal, promulgated on November 24, 1960. It began its activity on January 1, 1961, with provisional headquarters in the Chapel of Nazaré, consisting of large areas or sites, all belonging to the parish of São Martinho: Nazaré, with the neighborhood of the same name and also: Pilar, Virtudes, Barreiros and Lido‑Casa Branca.

It has a very high population density.

The image of Nossa Senhora de Nazaré, patron saint, was carried in procession at many Festivals, including those that took place on the second Sunday of September in the years 2000, 2001 to 2002.

From that date onwards, the Sunday Eucharist was no longer celebrated there (it began to be celebrated in the building of the future parish church, although it was still in rough and quite unfinished).

In the meantime, the Notary Service and the Eucharist on Wednesdays and the celebration of Baptisms continued to function in the Chapel of Nazaré.

On certain occasions, however, the said Chapel was given another use: there the blessing of the Palms was performed at the beginning of Holy Week, in addition to the celebration of baptisms (until the Dedication of the church) and weddings.

Currently, the family that owns the Chapel has donated it to the Parish of Nazaré, which is in the process of transition.

The parish church of Nazaré was dedicated by His Excellency Revma, the Bishop of Funchal, D. Teodoro de Faria, on December 15, 2002, the 3rd Sunday of Advent.

Its construction was initially planned for the Virtudes area, on land that was acquired for this purpose in the ’60s by the then parish priest, Manuel da Encarnação Gama.

At that time, the construction of the neighborhood was not foreseen.

When this was designed by the architect José Rafael Botelho, some community facilities were also included: school, kindergartens, health center, and church.

For that reason, it no longer made sense to think about building a church in the previously planned location: given that the neighborhood would be large in size, housing thousands of people, why would the church be in an area with a few dozen families, displaced from the greatest population center?

Thus, the land that had been acquired by Father Manuel Gama was sold, reversing the amount obtained in favor of the finishes of the new church, which the aforementioned architect Rafael Botelho had meanwhile sketched for the location (in that tight triangle between Beco da Fruta and Avenida do Colégio Militar) where it was actually built.

The initial project, with the respective model, was offered to Engineer Gonçalo Araújo, in a gesture of courtesy and friendship from Architect Botelho. Father Eduardo Freitas Nascimento was then parish priest.

However, from the end of the ’70s, the neighborhood was emerging and the first families began to occupy the first apartment blocks…

Although the exact year is not known, it was certainly in the 1980s that the foundations of the future church began, work accompanied by technicians from the Regional Secretariat for Social Equipment.

The architect José Rafael Botelho had returned to Lisbon and stopped monitoring the construction of the church.

The church advanced slowly and with many difficulties: some advances… and many stops! After years in which the spans were open and fully accessible to all types of intruders and loitering, the Regional Government decided to proceed with closing the spans in aluminum and covering them in tile.

Meanwhile, in 1998, a commission of parishioners together with the parish priest, Father João Francisco Dias, sent a letter to the President of the Regional Government, expressing their concerns about the state of the works, which were not progressing.

When the new parish priest, Father José Anastácio Alves, took office on October 10, 1999, the situation was this: the church was closed, with the structure in rough construction and the tile roof in place.

The keys were in the possession of the Regional Secretariat for Social Equipment.

In the week of October 10th to 16th, 1999, the Municipal Fire Department of Funchal was asked to give the church space a «general wash», so that it would be possible to celebrate the Eucharist there on Saturday, the 16th (there was little, dirtying the space of the church, as you can imagine!).

For the first Mass, there were practically no chairs or benches (just a few used chairs that several people donated, with some rugs… and a lot, a lot of dust!) – and there was no electricity, in the first days when it was celebrated in the «church » from Nazareth!

Despite the conditions we found ourselves in (and we continued to endure for another three years), the enthusiasm was great, the participation of the faithful was high… and neither the dust, nor the rain, nor the wind (which so often entered the opening behind the altar) prevented Sunday Mass from being celebrated in the «new church» from that date onwards. 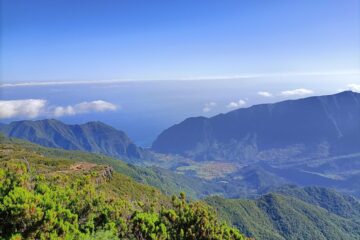 This company is one of the oldest among the exporting wine establishments of Madeira Island. The head office and department of tests and sales, are inserted in an emblematic and classified building built in 1619.In Read more…