The Electricity Museum “Casa da Luz”, is a Company Museum, (EEM- Empresa de Electricidade da Madeira), which is installed in the space of the old Thermal Power Plant of Funchal, opened in 1897, the then Madeira Electric Lighting Company Limited, first concessionaire of electricity in Madeira.

After various alterations, in 1949, the Municipal Electricity Services were set up, transferring a strategic sector to a public entity for the first time.

In 1974, the public company (EEM) will be created, responsible for the production, transmission and distribution of electric power in the Madeira Archipelago.

The Funchal Thermal Power Station was only definitively deactivated in 1989 and has since housed the Electricity Museum “Casa da Luz”.

The museum presents an exhibition on several thematic areas.

The first shows various types of lighting used in the city of Funchal and its respective street furniture, from the first examples of oil lamps to modern-day lamps, under the title “Lights of Funchal”.

A second thematic area presents us with an evolutionary history of electrification in the archipelago, under the title “A Century of Electricity”, with the presence of diverse machinery, with the two main forms of electric energy production: thermal and hydraulic.

A transformer station and its connection to an electricity pole were also installed in the exhibition area called the second nave.

This space was also completed with models of several power plants, and also of urban and rural electricity networks, as well as a three-dimensional orohydrographic chart that synthesises the gradual electrification effort of the archipelago.

A third area presents us with didactic purposes the exhibition “energy sources”, primary and renewable, on wind and solar energy, as well as an area dedicated to science and technology, endowed with interactive equipment and multimedia software.

This area has computers with software adapted to the theme (virtual reality helmet), plasma ball (Faraday cage), fibre optics and multimedia kiosk, where the Museum CD-rom can be explored.

It has a temporary exhibition area, a documentation centre, an auditorium, a shop and a cafeteria. It is also prepared with all the safety and circulation norms for disabled visitors.

The museum is located in the adapted installations of the old Thermal Power Plant of Funchal, inaugurated in 1870. 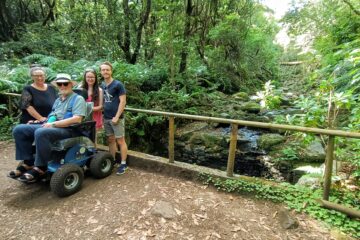 A Road for All

Levada Das Queimadas. A Path for All ♿ 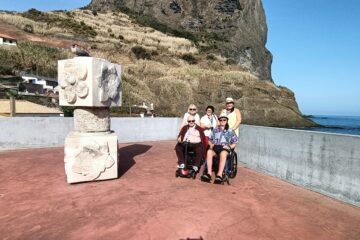 Protected: Description Discover A Little Bit Of Our History